A green screen background is a Tool used to superimpose subjects on top of other backgrounds. It makes something unique and professional. Sometimes called a chroma key, the background is either green or blue. When filmed, the green or blue in the video is then digitally removed and replaced with whatever background you see fit.

Green screens are used in different ways: from Hollywood filmmaking to news broadcasts and beyond. We will explore their history, how they work for both big-budget filmmakers and at home, and how you can create your green screen without breaking the bank!

Once the program is loaded, utilizing a green screen is straightforward. First, the video recording machine creates a key, which identifies the color of the green background, and then separates that color from everything else in the shot. Next, the remainder of the frame is superimposed onto another image or video (called backing track) to create a composite, resulting in your talent appearing to be anywhere you choose!

You can add effects in post-production by simply replacing your green background with an image or video file after you have finished shooting and uploading it to your editing program. However, if looking for something more real-time, you can use Apps like Teleprompter by BigVU.tv. It provides a Green Screen app that allows users to record against a completely customizable backdrop of their choice while they speak directly into their smartphone.

Green screens are a fundamental part of video editing for Hollywood movies. They have been there since the earliest days of the film industry. It helped create the special effects that viewers have come to expect as an element of cinematic storytelling.

Earlier, directors like Steven Spielberg and George Lucas used matte paintings and miniature models to create backgrounds for their films, but these techniques tended to be expensive and time-consuming. The introduction of green screen technology greatly simplified this process by enabling video creators to drop in almost any background they desired. Today, they are most commonly associated with big-budget movie productions.

Another benefit of green screens is that they are easy to use and edit. Green screens are designed to be utilized during filming detected by the software and may have their backgrounds altered later. It makes them helpful for both desktop editing software and mobile editing apps and for YouTubers who edit their videos on the go.

As for choosing the right green screen for your needs, you will want something durable enough to last without getting torn or stained (look for materials like cotton or vinyl), also large enough to fit what you need. For example, a smaller screen will suffice if you record yourself standing sideways in front of the camera. But, if you need a larger backdrop space to accommodate larger setups such as automobiles or furniture, a larger one would be preferable.

Looking for an easy way to make your video a little more professional, using green screen backgrounds is the best way. It makes your video seem cleaner and provides several tweaking possibilities. Any picture or animation may be projected behind you on camera using a green screen background. It appears three-dimensional with the correct software. It allows users to use any background they want and makes their videos stand out from others who do not have this option available.

A green screen background makes your content look better and easier to create. When people search online, while putting keywords in the title or description boxes, they ensure they are in their given categories. Viewers should know what they are getting before watching anything related to their topic. Videos from various YouTube creators based on the genre of their videos may share some common interests.

Green Screens Can Also Be Combined With Other Effects, Such As Letterboxing, To Create More Interesting Content

Making an easy video look more complicated is a great way to add more confidence and personality to your content, and you can do it with letterboxing. Letterboxing is used specifically for creating depth in a video, whether that is showing multiple things at once or just adding a background image. Combining green screen backgrounds with letterboxing will give you even more options for how your videos look!

This editing works well if you show two people talking to each on their screens. It can create a feeling of distance or separation between them, an effect if you want your audience to see the characters as separate or divided by something. You can also use letterboxing combined with green screen backgrounds when several people are in the same shot. It needs to be separated by different screens because it creates an illusion of being on monitors.

We all know that feeling. You are getting ready to film, and you notice a massive stack of dirty dishes in your sink, then scroll down to see your trash can is overflowing with garbage, and you are pretty sure of not vacuuming your apartment in months. It can be stressful when making an instructional video on how to bake a chocolate cake. But what if you could ignore these distractions and make it look like you were doing so with ease?

When filming against a green screen, instead of worrying about the background story, lighting, and time of day, you only need to focus on yourself! In addition, it allows for more intimate videos where the presenter is directly engaging with their audience without distraction.

Filming against a green screen also opens up endless possibilities as far as location goes! You have options to choose from, such as using a green screen on your own at home or renting out a studio space with one provided for you. You could also record outside using natural light and have some beautiful scenery behind you! Whatever background works best for your video can easily be applied when filming against one.

Green screen backgrounds are the preferred method for creating professional videos. While they may not be video editors‘ first choice, there are many benefits of using green screens that make them particularly useful and essential for creating high-quality videos.

They are easy to use. Unlike other professional tools, green screens are a cinch to operate and set up. All you need is a good lighting setup and a green screen backdrop stand, and you will be well on your way to making top-notch videos!

You can add animated characters and objects, whether a talking animal or an animated computer screen. Having custom animations in your videos is now easier than ever with green screen backgrounds! Just upload the image or video as an overlay on your clips, and voila! Your subject will interact with an animated character seamlessly.

You can easily add letterboxing to your content. Letterboxing (or letterboxing) is when you put black bars around the sides of your video, so the focus is solely on its subjects without any distractions from the original background scene. Such a shot draws your audience’s attention towards the action in front of them rather than what is happening behind them in the actual location of the footage. With green screens, it takes only a few clicks to achieve this effect with no editing experience is necessary!

12 TIPS HOW TO CREATE A CONTENT CALENDAR FOR YOUR BLOG

Maybe it’s because we were looking forward to seeing the end of 2020. But whatever the reason, you…
byRaveel
No comments

How to Open a Musical Instrument Store: The Essential Steps

You’ve always loved the strum of a guitar and the sound of piano keys softly. You’ve got sheet…
byadmin
No comments 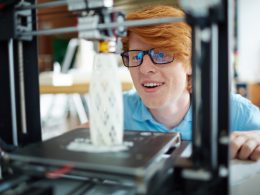 What Is 3D Printing? Here’s What You Need To Know

3D printing is the process of making three-dimensional solid objects from a digital file. The object forms by…
byadmin
No comments